The Emotional Intelligence of the Feeling of Disappointment

The Emotional Intelligence of the Feeling of Disappointment 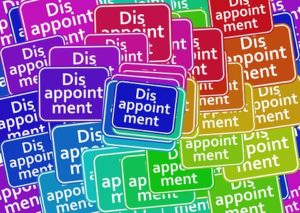 The feeling of disappointment is a normal and natural feeling that arises when things don’t go as you expected, desired or planned. Disappointment is the body’s way of telling you that it’s time to move on. Your desire, expectation or plan is done…whatever “it” is has ended. If you ignore the feeling of disappointment and do not fully accept the “ending”, you will most likely act indecisively and feel discouraged. And, this indecisiveness and feeling of discouragement will continue until you deeply accept the ending and are able to detach from the situation (a.k.a. let it go).

For those of you who have gone through a divorce, you know the feeling of disappointment. When I got remarried in 2010, I was 40 years old and truly thought I had found the person that I was going to spend the rest of my life with. Not only was there both a physical and spiritual attraction, but we were both career-driven, goal-oriented, and shared a lot of the same values and beliefs with regard to family, parenting, finances, travel, etc. Fast-forward a few years…things weren’t so great. (I’ll spare you the details and drama.)

There came a point when my therapist asked me why I was staying in the marriage. I said, “because I love him”. In truth, there were a few other factors going through my mind like: I had committed in my wedding vows that this was the person I was going to spend the rest of my life with. I didn’t want to get divorced. I didn’t want to fail…again. I didn’t want to quit. I didn’t want to accept that it was not going to work. Instead of feeling the disappointment of us (in truth) not being a good fit, I continued to stay and talk and fight and rationalize and minimize and deny. My days were filled with indecisiveness, and I constantly felt discouraged. I was unhappy. I was trying to hold on to something that my body was sending me clear signals that this deal is OVER! But, I didn’t want to listen. I didn’t want to let it go for the reasons I mentioned above.

I finally listened to my body and acted on the feeling of disappointment. I admitted it was over. I accepted that the marriage was going to end in a divorce. There… that was the cold, hard fact that I was avoiding. Of course, the divorce process totally sucked. It didn’t become easy because I accepted the truth of the situation. It was painful as hell, honestly. But now, coming up on three years later, I can see how much I’ve grown. I now know how important it is for me to listen to my inner guidance. I have a sense of peace and humility within which came from making yet another mistake in life and forgiving myself as I learn the lessons I am here to learn.

Next week, we’ll explore the feeling of Envy. Yes, it’s a feeling and it also has intelligence attached to it. Until next time…

This blog post was provided by Cindy M. Nelson, M.B.A., C.S.L.C. from Anakh Leadership Coaching LLC. We specialize in developing business leaders and professionals by increasing their self-awareness, emotional intelligence, and overall effectiveness thereby increasing professional success and personal satisfaction in their lives. For more information, please go to aleadershipcoach.com.

As a Certified Spiritual Life Coach, I specialize in emotional and social intelligence coaching for business leaders and key managers to increase effectiveness and overall satisfaction in both business and personal arenas. I provide one-on-one coaching in person or over the phone.